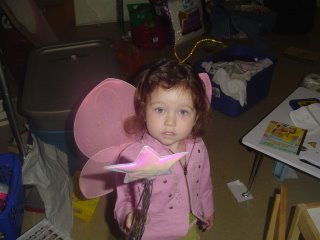 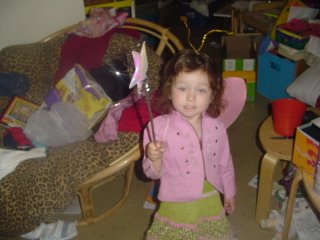 These are the pictures Jeremy took this morning when Lily left for daycare! I'm off to make spongebob angelfood cake.
Posted by Jenny at 4:33 PM No comments:
Email ThisBlogThis!Share to TwitterShare to FacebookShare to Pinterest 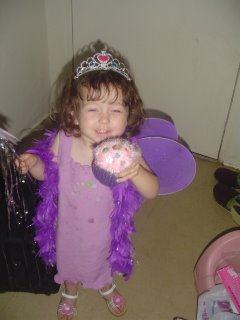 Okay. Guest Editor here. Is this that Information Superhighway?

Jenny wanted me to post some of the pictures of Lily's first birthday party--the first one she actively anticipated and might remember. Once she was told of its location (the Phoenix Zoo) she regularly beckoned us to "Go zoo." She actually speaks in perfect sentences, so I'm not sure why she said it that way.

Anyway, at the party Lily crafted with her mommy, which was like never leaving home, except for the carousels and kids and monkeys, mostly. The hosts of the party knit a cupcake for Lily in her favorite color and with neat little buttons. She is toasting us with it in the first picture while also giving a preview of her Halloween costume. She called herself a princess, her mother agreed, and so Lily naturally asked, "Where's my castle?" Fortunately, we found one very well-located in the corner of her room.

Also at the party, they made masks that I am made to wear (either as elephant or giraffe) but I'm told strictly to wear my glasses over my mask, and we wear them to Lily's castle (or her purple tent) where Lily and I both share "magic" (or: imaginary) drink boxes 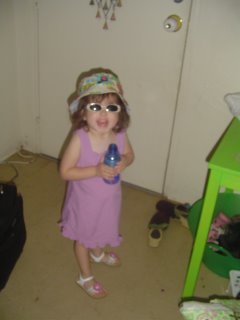 that she still needs my help to open. She uses her magic wand to conjure the magic Krabby Patties, too, which she feeds to her toothless Play-doh dental patient. It's a good way to spend a Sunday morning after Stephanopolous. 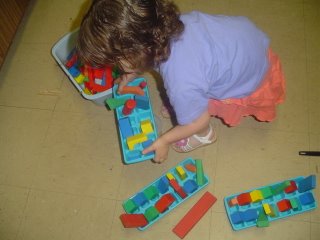 I'm so glad you asked 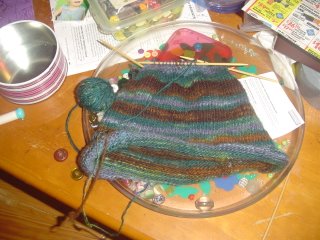 I have been rather busy of late. I started carpooling, but my carpoolee unexpectedly took another job (well, anyway, I wasn't expecting it). I did get like three days of knitting in. I used Stephanie's gorgeous handspun in the "Pine Forest" colorway and kind of winged it on the pattern (thank you, yarn harlot!). I see a "matching" scarf in my future. I have been wondering if I should get my Christmas knitting underway, and what that should entail. (maniacal laughter is encouraged) Maybe I'll just sew this year... 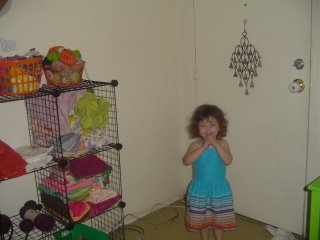 Here is Lily in her most preppiest dress! And you can see how I have modified some shelves to store my stash. I had this all planned out this afternoon, but now it is way past my bedtime. Tomorrow, I will make notes.
Posted by Jenny at 9:54 PM No comments:
Email ThisBlogThis!Share to TwitterShare to FacebookShare to Pinterest

- ruminations on "But you don't sound Southern."
- a biography/tutorial of Alexandretta, the castle wheel
- actual knitting!
- possibly some pictures!
- ruminations on "Do I make things, or merely collect stuff with crafty potential?"
- Cute Lily Stuff!
- And whatever it is that has been happening so that I have not been blogging like I should.
Posted by Jenny at 7:12 PM 1 comment:
Email ThisBlogThis!Share to TwitterShare to FacebookShare to Pinterest
Newer Posts Older Posts Home
Subscribe to: Posts (Atom)